Aspiring in its Environmental Vision 2050 to work together create a society that has overcome climate change, the Kirin Group is striving to reduce CO2 emissions in conjunction with its stakeholders toward the goal of realizing Net-Zero GHG emissions from the entire value chain and taking the lead to build a decarbonized society.

Under the Kirin Group Environmental Vision 2050, the society overcoming climate change that we want to create together in 2050, the Kirin Group will reduce GHG emissions throughout the Value Chain to Net-zero and we will also work with stakeholders to reduce CO2 emissions in order to take the lead in building a carbon-free society.

SBT Initiative was jointly established in 2015 by CDP (formerly the Carbon Disclosure Project), the United Nations Global Compact, the World Resources Institute (WRI) and the World Wildlife Fund (WWF) to encourage firms to set GHG emissions reduction targets based on scientific evidence with the aim of controlling global warming within 2℃ above pre-industrial levels.
Presently, 961 corporations around the world (as of August 26, 2020) have endorsed the initiative, of which 445 corporations have their targets publicly disclosed as certified SBTs.

The CO2 emissions in 2019 from plants and research laboratories in Japan and overseas plants decreased by 7.8% compared with the previous year to 330,000 tons*1, which was 73.8% of the emissions level in fiscal 1990, or a 26.2% reduction*1, meaning that we are well in line with the fiscal 2020 global target. This was attributable to the restructuring of our domestic manufacturing bases, and ongoing efforts are made to reduce CO2 emissions. Specifically, we are introducing energy-efficient air conditioners, installing facilities with cutting-edge energy-saving features at our new buildings, and employing spot air conditioners. We are also trying to improve our facility management, for example, by optimally controlling freezers and air conditioners to save more energy.

News Release: Kyowa Kirin signs up to “Aqua Premium” in a first for pharmaceutical manufacturing industry (in Japanese only) 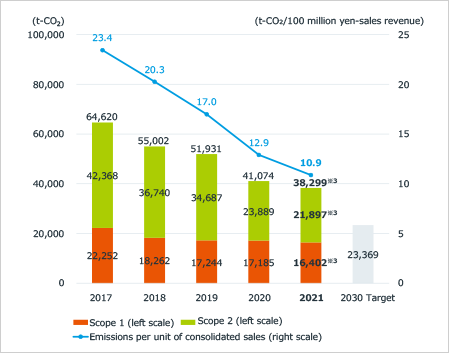 In an effort to promote the wider use of renewable energy, Kyowa Kirin has been installing solar power generation facilities since 2011. As of 2020, such facilities are in operation at the Tokyo Research Park, Fuji Site, and the Ube and Takasaki plants, generating a total of 135,000 kWh of solar power, equivalent to 78.4 tons* of CO2 emissions. 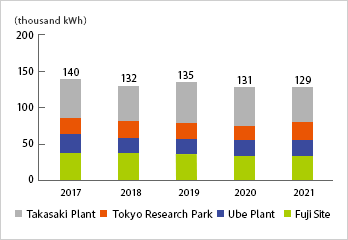 The Kyowa Kirin Group has been replacing its commercial vehicles from conventional low-emission certified vehicles to hybrid vehicles in phases since 2009. As of the end of fiscal 2019, the hybrid car introduction rate of company-owned vehicles has reached 100%, and all commercial vehicles have been switched to hybrid vehicles, allowing us to save on fuel consumption for sales activities, while also achieving reduced CO2 emissions. We will consider the relationship between information provision activities and the environmental impact, and proceed with efforts toward the realization of a low-carbon corporate group. 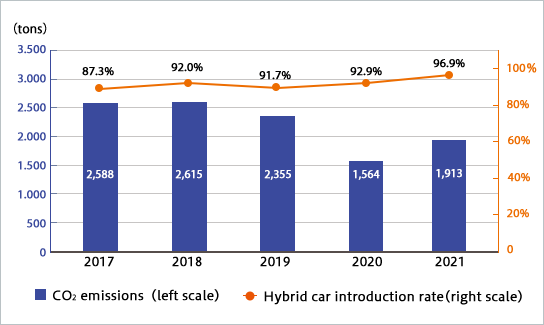 At the Kyowa Kirin Group, as part of its ISO 14001-based environmental activities across all back office divisions, the head office, plants, research laboratories, and sales offices promote the Green Office Plan (GOP) in cooperation with the labor union, administrative and procurement divisions, and others. In fiscal 2019, the green purchasing rate reached 89%, electricity consumption per employee decreased by 7.6% from the previous year, and copier paper consumption per employee declined by 6.0% vis-à-vis average use in the past three years. We will continue working to implement the GOP.